Sucheta Dalal is an Indian business journalist and author who has been a journalist for 25 years. She is the recipient of various accolades including the Padma Shri, India’s fourth highest civilian honour. Dalal is best known for her numerous investigative reports on Indian Stock Markets, Trading, Consumer Protection, Infrastructure Projects and Budgets. She gained fame, notably for breaking the securities scam in 1992 which was India’s biggest financial scandal until then. With her husband Debashis Basu, she co-authored a book on the securities scam called The Scam: Who Won, Who lost, Who got away (1993). She has been the Financial Editor of the Times of India until 1998. Born in 1962 in Mumbai, India, she studied B.Sc Statistics at Karnataka College, Dharwad. In 1990s, she joined the prominent Mumbai based newspaper Times of India as a journalist for their Business and economics wing and investigated a number of cases that would eventually lead to her prominence in the fields of journalism and activism. these included the Harshad Mehta scam of 1992, the Enron scam, the Industrial Development Bank of India scam, and the Ketan Parekh scam on 2001. She is married to Debashis Basu. 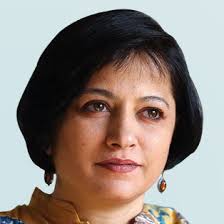 Books: The Scam: Who Won, who Lost, who Got Away, A.D. Shroff: Titan of Finance and Free Enterprise

Sucheta Dalal Facts:
*She was born in 1962 in Mumbai, India.
*She is a trained lawyer having gained LLB and LLM from Bombay University.
*On 23 April 1992, she exposed stockbroker Harshad Mehta’s illegal methods in a column in The Times of India.
*She is the winner of the civilian award Padma Shri in 2006.
*She has been a Member of the Investor Protection and Education Fund.
*She runs MoneyLife Smart Savers Network, a community initiative aimed to educate and collate individual investors to become better at investing.
*Visit her official website: www.suchetadalal.com
*Follow her on Twitter and LinkedIn.