T.I. is an American rapper and actor. He is best known for the singles “Top Back,” “Soldier,” “Whatever You Like,” “U Don’t Know Me,” “Live Your Life,” “About the Money” and “No Mediocre”. He has released ten studio albums: I’m Serious, Trap Muzik, Urban Legend, King, T.I. vs. T.I.P., Paper Trail, No Mercy, Trouble Man: Heavy Is the Head, Paperwork, and Dime Trap. He has also been featured in several music videos for other prominent recording artists. In addition to music, he has acted in a number of films, including ATL (2006), American Gangster (2007), Takers (2010), and Ant-Man (2015). He has also starred in the American reality television series T.I.’s Road to Redemption, T.I. & Tiny: The Family Hustle, and The Grand Hustle. Born on September 25 1980 in Atlanta, Georgia, USA, to Violeta Morgan and Clifford “Buddy” Harris, Sr., his birth name is Clifford Joseph Harris Jr. He attended Douglass High School, but later dropped out. He was arrested several times as a teen for selling drugs. He was discovered and signed to Ghet-O-Vision Entertainment, when he was a teenager by record executive Kawan “KP” Prather. He signed his first major-label record deal in 1999 with Arista subsidiary LaFace. He married Tameka “Tiny” Cottle in 2010. He is the father of six children. 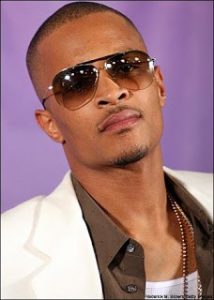 T.I. Facts:
*He was born on September 25 1980 in Atlanta, Georgia, USA.
*He began rapping at age eight.
*In 2001, he released his debut album, I’m Serious.
*His 2012 album, Trouble Man: Heavy Is the Head, peaked at number two in the US and was certified gold by the RIAA.
*He has his own record label called Grand Hustle Entertainment.
*His favorite actress is Angela Bassett.
*He is good friends with other rappers like Jay Z, Sean ‘Diddy’ Combs, B.G., Jeezy, Young Buck, and Lil’ Wayne.
*Follow him on Twitter, YouTube, Facebook and Instagram.