Tameka Empson, born April 15, 1977, is a British stage and screen actress and comedian who is perhaps best known for being one of the three protagonists in the hidden-camera comedy sketch show 3 Non-Blondes. Empson’s other notable works include Beautiful Thing, Beautiful People, EastEnders. Empson was born in Stoke Newington, London, England as Tameka Lydia Empson. Her parents were from Ivory Coast and emigrated to England before Tameka was born. She has two younger sisters named Kesha Margaret Empson and Emilia Jane Empson. 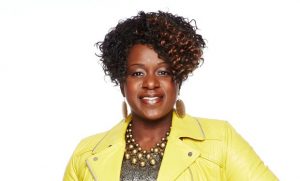 Tameka Empson Facts:
*Her parents were from Ivory Coast and emigrated to England before she was born.
*She is one of 5 British soap actresses to have acted out giving birth in a live episode.
*She was 8 months pregnant with her daughter Nylah when she took maternity leave from filming EastEnders (1985).
*She has two younger sisters, Kesha Margaret (b. 1981) and Emilia Jane Empson (b. 1983).
*Follow her on Twitter.