Johnny Knoxville, born March 11, 1971, is an American actor, film producer, screenwriter, comedian and stunt performer, well known as a co-creator and star of the MTV reality stunt show Jackass. He has also appeared in the films such as Men in Black II, A Dirty Shame, The Dukes of Hazzard, The Ringer, The Last Stand and Skiptrace. Born Philip John Clapp, he grew up in southern Knoxville, Tennessee. He married Naomi Nelson in September 24, 2010. They have two children named . He was previously married to Melanie Lynn Cates. 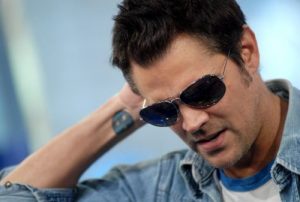 Johnny Knoxville Facts:
*He has his daughter’s name Madison tattooed on his chest.
*When he was 8 years old, he had flu, pneumonia, and bronchitis all at same time and nearly died.
*His dad, Philip Clapp, sells used cars.
*His ancestry includes English, and a smaller amount of German and Scots-Irish (Northern Irish).
*Follow him on Twitter, Facebook, Myspace, and Instagram.