German model and actress who came to prominence in the 1980s and 1990s. She appeared on the cover or been featured in many international fashion magazines including Elle, Harper’s Bazaar, Cosmopolitan, and Vogue. She has worked with top fathion photographers such as Irving Penn, Helmut Newton, Steven Meisel, Denis Piel, Sheila Metzner, and Wayne Maser. Patitz appeared in the 1990 music video “Freedom! ’90” by George Michael, along with Cindy Crawford, Linda Evangelista, Christy Turlington, and Naomi Campbell. She has worked with agencies like The Model CoOp (New York), VIVA Model Management (Paris, London, Barcelona), d’management group (Milan), Elite Model Management (Amsterdam), Mega Model Agency (Hamburg), LA Model Management (Los Angeles), and Munich Models (Munich). Born on May 25, 1966 in Hamburg, Germany, she was raised in Skanör, Sweden. She has a younger sister named Sophie. She was in a long term relationship with singer Seal. She had one son, Jonah, in 2004. 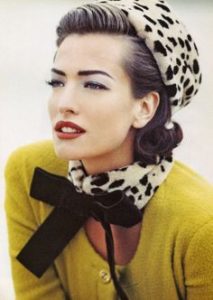 Tatjana Patitz Facts:
*She was born on May 25, 1966 in Hamburg, Germany.
*At age 7, she learned to ride horses, and is an avid horsewoman.
*She was featured with supermodel friends Naomi Campbell, Linda Evangelista, Christy Turlington and Cindy Crawford in George Michael’s music video “Freedom 90”.
*She had a long time relationship with recording artist Seal.
*She is vegetarian.
*Follow her on Instagram.