Taylor Lautner is an American actor. He is best known for portraying Jacob Black in The Twilight Saga film trilogy. He also starred in The Adventures of Sharkboy and Lavagirl in 3-D, Abduction, The Ridiculous 6, and Run the Tide. He has also done voice work in What’s New, Scooby-Doo?, Duck Dodgers, and Danny Phantom. In 2013, he began starring in the BBC sitcom Cuckoo as the son of the titular main character. Born Taylor Daniel Lautner on February 11, 1992 in Grand Rapids, Michigan, USA to Deborah and Daniel Lautner, he has one younger sister named Makena. He belongs to Austrian, English, German, Swiss-German, and French descent. He attended Valencia High School in Valencia, California. He made his film debut in Robert Rodriguez’s The Adventures of Sharkboy and Lavagirl. He was in a relationship with Taylor Swift from July 2009 to December 2009, and with Abduction co-star Lily Collins from 2010 to 2011. 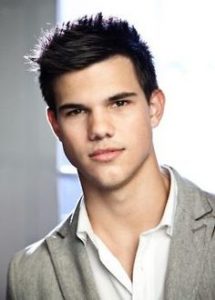 Taylor Lautner Facts:
*He was born in Grand Rapids, Michigan, USA on February 11, 1992.
*He played football while in high school.
*He has learnt karate since the age of 6.
*He gained his black belt by age 8.
*He was ranked #2 on Glamour Magazine’s 50 Sexiest Men of 2010.
*In 2008, he ranked #1 in Access Hollywood’s “Top Five Hollywood Abs”.
*People Magazine named him one of the top 100 Most Beautiful People in the World in 2009 and 2011.
*In 2010, he was placed at #3 in the list of ‘Top 10 Best Summer Bodies’ by Men’s Health Magazine.
*He is close friends with Robert Pattinson and Kristen Stewart.
*In 2011, he was named as one of the “Sexiest Men” by Glamour.
*His favorite actors include Tom Cruise, Brad Pitt, Denzel Washington, and Matt Damon.
*Follow him on Facebook and Instagram.