Taylor Spreitler is an American actress and model. She is best known for her portrayal of Mia McCormick on the soap opera Days of Our Lives, and for her role as Lennox Scanlon on ABC Family’s Melissa & Joey. In 2016, Spreitler starred as Kendra Gable in the CBS sitcom Kevin Can Wait. Her notable film credits include the comedy 3 Day Test, the action thriller The Contractor, the horror films Amityville: The Awakening and Leprechaun Returns. Born Taylor Danielle Spreitler on October 23, 1993 in Hattiesburg, Mississippi, to parents Denise and Danny Spreitler, she spent most of her growing years in Wiggins, Mississippi and Amory, Mississippi. Spreitler began her career as a model and appeared in ads for companies like Motrin, Hess and Chuck E. Cheese. She made her film debut in All Souls Day (2007). She dated former model and actor, Dylan Patton. 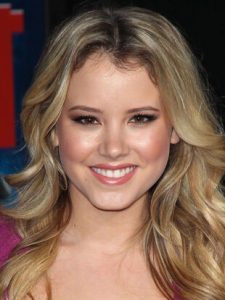 Taylor Spreitler Education:
She was homeschooled from A Beka Academy.

Taylor Spreitler Facts:
*She was born on October 23, 1993 in Hattiesburg, Mississippi, USA.
*She is of English, German, and Scottish descent.
*She started her career as a model in 2005.
*She played Mia McCormick in the daytime soap opera Days of Our Lives from 2009 to 2010.
*She starred as Lennox Scanlon in the ABC Family original television series Melissa & Joey from 2010 to 2015.
*She is a devout Christian.
*Tina Fey is her favorite actress.
*On July 7, 2016, Taylor’s father committed suicide due to depression.
*Visit her official website: www.taylorspreitler.com
*Follow her on Twitter, Facebook and Instagram.