Thomas Kuc is an actor born in São Paulo, Brazil. He is best known for his portrayal of Hudson on the Nickelodeon comedy television series Game Shakers. Kuc also played the role of Danny in the supernatural thriller The Diabolical (2015). He has also starred in a number of voice overs and commercials including an Old Navy Back To School commercial. 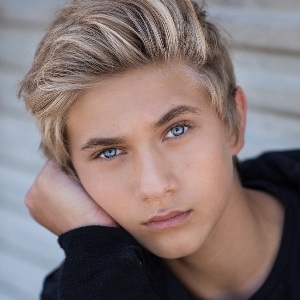 Born Thomas Nicholas Kuc on October 10, 2002 in São Paulo, State of São Paulo, Brazil, to parents Paul and Anna Supera-Kuc, he moved to California at a very young age. His older sister, Alma, is a gymnast for the Polish National Olympic Team. Kuc began his career at the age of 10, with a flashback role as “Young Jason” in the sitcom series “General Hospital”. He began dating Ava Dalgaard in October 2019.

Thomas Kuc Facts:
*Born on October 10, 2002 in São Paulo, State of São Paulo, Brazil, he is of Polish descent.
*He’s been a competitive gymnast since the age of five.
*He played Hudson on the Nickelodeon series Game Shakers.
*He enjoys surfing and skateboarding in his free time.
*He is fluent in Polish, Mandarin, Portuguese, Spanish and English.
*He has a pet dog, Nova.
*Follow him on Twitter, Facebook and Instagram.