Thomas Muster is an Austrian former world No. 1 professional tennis player who was known as “The King of Clay.” He won the men’s singles title at French Open in 1995. After winning the Orange Bowl juniors tournament, he turned professional in 1985. He has won eight Masters 1000 series titles. Born in Leibnitz, Styria, Austria, on October 2, 1967, to Inge and Heinz Muster, he played his first match for Austria in the Davis Cup in 1984. He has been married to Caroline Ofner since 2010. He was previously married to Jo Beth Taylor. He has two children. 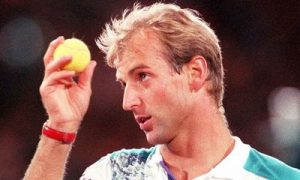 Thomas Muster Facts:
*He turned professional in 1985, and retired in 2011.
*He was known as one of the world’s clay court masters.
*He won the French Open in 1995, capping a comeback from a broken leg sustained in an auto accident in 1990.