Tiffani Thiessen is an American actress of television and film. She is best known for television roles as Kelly Kapowski on NBC’s Saved by the Bell and as Valerie Malone on Fox’s Beverly Hills, 90210. Her other well-known television credits include Fox’s Fastlane, ABC’s What About Brian, and USA Network’s White Collar. Thiessen has also appeared in such films as Hollywood Ending, Shriek If You Know What I Did Last Friday the Thirteenth, Ivans XTC, Son in Law, and Cyborg Soldier. She received Young Artist Award nominations in 1990, 1992, and 1993. Born Tiffany Amber Thiessen on January 23, 1974, in Long Beach, California, USA, to Robyn Ernest and Frank Thiessen, she is the middle sister of Todd Tesen and Schyler Thiessen. She attended Cubberley Elementary School and Marshall Junior High School in Long Beach, California. She later attended Valley Professional High School. Thiessen spent much of her youth participating in beauty pageants and working as a model. She won the Miss Junior America pageant in 1987, and Teen Magazine’s “Great Model Search” in 1988. On July 9, 2005, she married her boyfriend of two years, actor Brady Smith. They have two children; daughter Harper Renn (born on June 15, 2010) and son Holt Fisher (born on July 1, 2015). 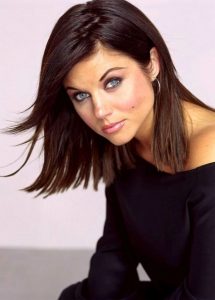 Tiffani Thiessen Facts:
*She was born on 23 January 1974 in Long Beach, California.
*She began her career as a model at age 8.
*Made Cover Girl Magazine’s Model of the Year 1989.
*She appeared in the Stuff magazine sexiest woman of the year 2002, ranked at 95th position.
*In 2006, she ranked #43 in 100 Greatest Teen Stars.
*She started her own production company, Tit 4 Tat Productions.
*According to IMDb, she has five dogs named Buck, Pearl, Bo, Penny, and Maggie; a cat named Savannah; a hen named Ruby; and four chickens named Anna, Elsa, Mable, and Sugar.
*Visit her official website: www.tiffanithiessen.com
*Follow her on Twitter, Pinterest, Facebook and Instagram.