Tiffany Thornton is an actress, radio host and singer. She is best known for her portrayal of Tawni Hart on the Disney Channel shows Sonny with a Chance and So Random!. Her other roles include 8 Simple Rules, That’s So Raven, American Dreams, The O.C., Desperate Housewives, Jericho, Wizards of Waverly Place and Hannah Montana. Tiffany was born on February 14, 1986 as Tiffany Dawn Thornton in College Station, Texas, USA. Her parents separated when she was eight years old. She married Court Officer Chris Carney in 2011. She and Carney welcomed their first son, Kenneth, in 2012 and their second son, Bentley, in 2014. On December 4, 2015, Carney was killed in a car crash. 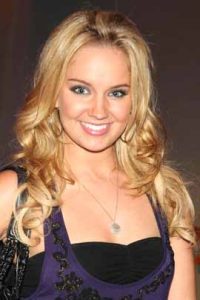 Tiffany Thornton Education:
She is an alumna of Texas A&M University.

Tiffany Thornton Facts:
*Her parents divorced when she was 8 years old.
*Her husband Christopher died in a car accident in December 2015.
*If she wasn’t an actress she would have liked to be a pediatrician.
*She played basketball and tennis in junior high. She was a cheerleader while in school.
*Best friends with Katelyn Tarver, ‘Karleigh Santry’ and ‘Katie Santry’.
*She has a puppy back in Texas named Lacy.
*Official website: www.tiffanythornton.com
*Follow her on Twitter, Facebook and Instagram.