Tila Tequila is an American television personality and internet celebrity who starred on MTV’s dating game show A Shot at Love with Tila Tequila in 2007. She first rose to fame through her active presence on social networking websites. She became the most popular person on MySpace, with a record breaking 1.4 million friends. Her films credits include I Now Pronounce You Chuck and Larry and Masterminds. As a singer, she has released various singles and EPs. She released her debut EP, Sex, in 2010, followed by her second EP, Welcome to the Dark Side in 2010. Born Thien Thanh Thi Nguyen on October 24, 1981 in Singapore, she has an older brother, Daniel, and older sister, Terri. She belongs to French and Vietnamese descent. Playboy scout discovered her in a mall and offered her a modeling job when she was 19 years old. She was engaged to Casey Johnson from 2009 until Johnson’s death on January 4, 2010. She has a daughter named Isabella Monroe Nguyen, with her ex-boyfriend Thomas Paxton Whitaker. 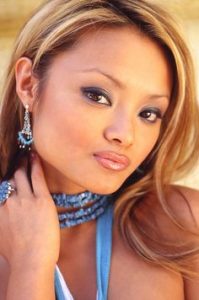 Books: Hooking Up with Tila Tequila: A Guide to Love, Fame, Happiness, Success, and Being the Life of the Party

Tila Tequila Facts:
*She was born in Singapore and raised in Houston, Texas.
*She is the youngest in her family.
*She is of Vietnamese and French descent.
*She is a 2000 graduate of Alief Hastings High School.
*She moved to Los Angeles in 2001 to pursue her modeling career.
*While growing up, she was a tomboy.
*She lost her virginity at 15 and at 16 became pregnant.
*She became the first Asian Cyber Girl of the Month for Playboy in 2002.
*She has her own clothing line called “Tila Fashion.”
*Visit her official website: www.tilatequila.com
*Follow her on YouTube, Facebook and Google+.