Elisha Cuthbert is a Canadian actress and model, best known for her role as Kim Bauer in the series 24. She is also known for her roles in television, such as Are You Afraid of the Dark?, Happy Endings, Family Guy, Lucky Girl, The Forgotten, and One Big Happy, and in the films The Girl Next Door, Old School, Captivity and the 2005 remake of House of Wax. Born Elisha Ann Cuthbert on November 30, 1982 in Calgary, Alberta, Canada to Patricia and Kevin Cuthbert, she was raised in Greenfield Park, Quebec. She has a younger sister, Lee-Ann, and a younger brother, Jonathan. She started modeling at the age of 9, working as a foot model. After graduating from Centennial Regional High School in 2000, she moved to Los Angeles at the age of 17. She has been married to hockey star Dion Phaneuf since 2013. They have a child together. 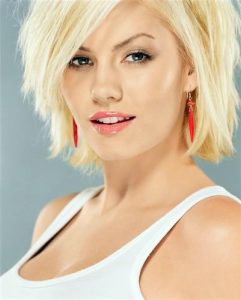