Tim Tebow was born Timothy Richard Tebow on August 14, 1987 in Manila, Philippines to Pamela and Robert Tebow. He is a former professional American football player who won both the BCS National Championship and the Heisman Trophy while playing for the Florida Gators in college. He got drafted by the Denver Broncos as the 10th pick in the 2010 NFL Draft. He was the first sophomore to win the Heisman Trophy, the Sullivan Award, the Davey O’Brien Award, and the Maxwell Award (2007, 2008). 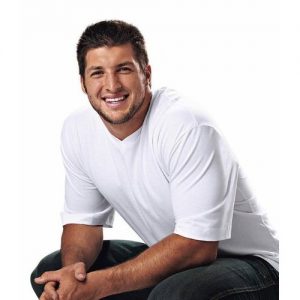 Tim Tebow Facts:
*He is known to have English, German, Irish, and Scottish ancestry.
*His parents, Bob and Pam, were both Baptist missionaries.
*He has been played by David J. Phillips, Taran Killam, Matt Baxter Luceno, Daniel Sobieray, and Michael Daniel Cassady.
*He has two brothers (Robby Tebow, Peter Tebow), and two sisters (Kathryn, Christine).
*Follow him on Twitter, Facebook and Instagram.