Tisha Campbell-Martin is an American television and film actress, singer, and dancer. She is best known for television roles as Marva Foley on Rags to Riches, Gina Waters-Payne on Martin, Jay Kyle on My Wife and Kids, Patty Mannix on Rita Rocks, and Damona Watkins on Dr. Ken. In 2011, she portrayed Michelle Dulcett in the Lifetime police drama The Protector. She is also known for her roles in films School Daze, Rooftops, Another 48 Hrs., Boomerang, and Sprung. Campbell received Independent Spirit Award for Best Supporting Female nomination for her role in the 1990 comedy film House Party. As a singer, Campbell released her debut album, Tisha, in 1992, which was a moderate success. She released her single, “Steel Here” in September 2015. She also appeared in several music videos in the 1990s and 2000s, including two for Will Smith (“Wild Wild West” and “Will 2K”) and Toni Braxton (“You’re Makin’ Me High”). Born Tisha Michelle Campbell on October 13, 1968 in Oklahoma City, Oklahoma, USA, to parents Mona Campbell and Clifton Campbell, she was raised in Newark, New Jersey. She has an older brother, a younger sister, and three younger brothers. She graduated from Newark Arts High School in Newark, New Jersey. She made her screen debut appearing in the 1986 rock musical comedy film Little Shop of Horrors, and later starred in the short lived NBC musical comedy-drama series, Rags to Riches (1987–88). She married actor Duane Martin in 1996, and the couple had two sons named Ezekiel and Xen before getting divorced in 2018. 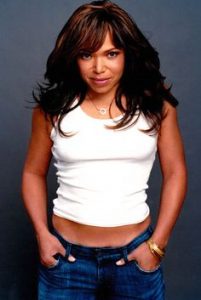 Tisha Campbell-Martin Facts:
*She was born on October 13, 1968 in Oklahoma City, Oklahoma, USA.
*She is the daughter of Mona Campbell and Clifton Campbell.
*Her mother was a nurse, talent manager, gospel singer, and vocal coach, and her father was a factory worker and singer.
*She began her TV career at the age of 8.
*Following graduation from Newark Arts High School, she moved to Hollywood, and starred in the short-lived NBC musical comedy drama Rags to Riches.
*She is good friends with Tichina Arnold, and Vivica A. Fox.
*Follow her on Twitter, YouTube and Instagram.