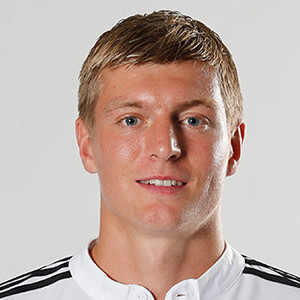 Toni Kroos Facts:
*He was born on January 4, 1990 in Greifswald, Germany.
*He began his youth career with Greifswalder SV at the age of 7.
*He first played for local club Greifswalder SC, later transferring to the youth team of Hansa Rostock. Kroos moved to Bayern Munich’s youth setup in 2006.
*He was the top scorer at the European Under-17 Football Championship in 2006.
*He won the Golden Ball award for best player at the FIFA U-17 World Cup in 2007.
*He joined Bayern Munich in 2007 and Germany’s national team in 2010.
*He helped lead Germany to a World Cup in 2014.
*He helped Real win three consecutive Champions League titles from 2015-16 to 2017-18.
*He owns a house on the island of Mallorca.
*Visit his official website: www.toni-kroos.com
*Follow him on Twitter, Facebook and Instagram.