Tracey Edmonds is an American businesswoman, model and television personality who currently serves as President & CEO of Edmonds Entertainment Group Inc and President and COO of Our Stories Films. She served as Co-Host on the television show Extra for 3 years, and earned an Emmy award while on the show. She also served as executive producer of College Hill and Lil’ Kim: Countdown to Lockdown. Born Tracey Elaine McQuarn on February 18, 1967 in Los Angeles, California, to Jacqueline and George McQuarn, she is the older sister of Michael McQuarn. She is a Stanford University graduate with a degree in psychobiology. She married R&B musician Babyface in 1992, and the couple had two sons, Brandon and Dylan before getting divorced in 2007. Since 2012, she has been in a relationship with Deion Sanders. 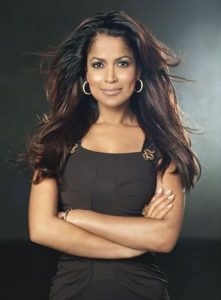 Tracey Edmonds Facts:
*She was born in Los Angeles, California, and her parents are divorced.
*She studied psychobiology at Stanford University.
*She is the President & CEO of Edmonds Entertainment Group.
*She served on the Producers Guild of America’s Board of Directors.
*She is longtime friend of Nicole Richie and friends with Steve Harvey.
*She has two sons, Brandon and Dylan.
*Follow her on Twitter and Instagram.