Ashley Benson is an American actress. She is best known for playing the role of Hanna Marin in the American teen drama mystery-thriller television series, Pretty Little Liars, for which she won a Youth Rock Award for Rockin’ TV Actress in 2011. She played Abigail Deveraux in NBC’s soap opera Days of Our Lives from 2004 to 2007. She has also starred in such films as Bring It On: In It to Win It, Christmas Cupid, Spring Breakers, Ratter and Chronically Metropolitan. Born Ashley Victoria Benson on December 18, 1989 in Long Beach, California, to Jeff Benson and Shannon Harte, she belongs to Irish, English, and German descent. She has an older sister, Shaylene Benson. She began modeling when she was 8, appearing in print advertisements. She was in a relationship with swagger coach Ryan Good from 2011 to 2015. 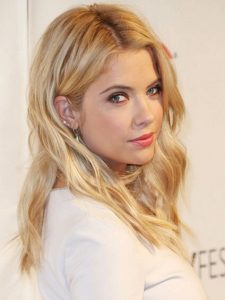 Ashley Benson Education:
She was homeschooled.