Martha Higareda is a Mexican actress, producer and screenwriter. She is best known for playing the role of Laura in the 2010 film Te presento a Laura, which was in the top ten films in box-office for 10 consecutive weeks. She has also played prominent roles in the films Bad Girls (2007), All Inclusive (2008), Mariachi Gringo (2012), and Hello Herman (2012). Born Martha Elba Higareda Cervantes in Villahermosa, Mexico, on August 24, 1983, to Martha Cervantes and Jose Luis Higareda, she has two brothers, Luis Daniel and José Luis and one sister, Miriam, who is also an actress. She started acting on stage at a very early age, along with dancing jazz, flamenco, tap and folklore. She moved to Mexico City from her native Tabasco to pursue an acting career at the age of 14. She had her first TV debut as an anchor hostess in Disney Channel’s Zapping Zone. 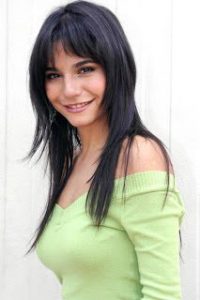 Martha Higareda Facts:
*She was born to Martha Cervantes and Jose Luis Higareda.
*She is the sister of actress Miriam Higareda.
*She played Mariana in the 2017 film 3 Idiotas, remake of Indian Film 3 Idiots.
*Follow her on Twitter, Facebook and Instagram.