Traylor Howard is an American actress. She is best known by the public for her roles as Sharon Carter on the television series Two Guys and a Girl, and as Natalie Teeger on the USA Network series Monk. She played Joy Byrnes in the short-lived sitcom Boston Common. She was also featured in the music video of the Foo Fighter’s song “Breakout.” Born Traylor Elizabeth Howard on June 14, 1966 in Orlando, Florida, to Peggy E. and Robert M. Howard, Jr., she started out doing commercials. After graduating from Lake Highland Preparatory School in Orlando, Florida, she studied communications and advertising at Florida State University. She married Jarel Portman in 2011. She was previously married to Christian Navarro and Cameron Hall. She has two sons, Sabu Howard and Julien Portman. 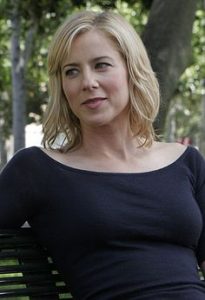 Traylor Howard Facts:
*She was born and raised in Orlando.
*She is a 1984 graduate of Lake Highland Preparatory School.
*She has a degree in communications and advertising from Florida State University.
*She appeared in a Juicy Fruit gum commercial while in high school.