Adriana Lima is a Brazilian model and actress. She is most famous for being Victoria’s Secret Angel since 2000 and as a spokesmodel for Maybelline cosmetics from 2003 to 2009. She is also famous for her Super Bowl and Kia Motors commercials. She became the first Victoria’s Secret Angel on November 30, 2015 when her wax figure was added at the Madame Tussauds New York. She has also modelled for many ad campaigns including, Anna Sui Jeans, Bebe, Gasoline, Mossimo, Victoria’s Secret, BCBG, Keds, and XOXO. She has featured in numerous magazine covers and shoots, including Vogue and Marie Claire. Born Adriana Francesca Lima on June 12, 1981, at Salvador, Bahia, Brazil, to Nelson Torres and Maria da Graca Lima, she was raised by her mother. She had two daughters named Valentina and Sienna with former NBA player Marko Jaric, whom she was married to from 2009 to 2016. 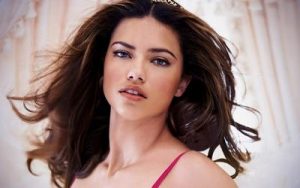 Adriana Lima Facts:
*Born in June 12, 1981, in Salvador, Brazil, her father left the family when she was six months old.
*She was discovered at the shopping mall at the age of 13.
*She won Ford’s “Supermodel of Brazil” competition at the age of 15.
*She had her first kiss at the age of 17.
*She speaks Portuguese, English, Spanish and Italian fluently.
*She was named number 57 on Maxim’s annual Hot 100 issue on (2003).
*She is the favorite model of photographer “Ellen von Unwerth”.
*She appeared in Pirelli Calendar in 2005.
*She was ranked #53 on the Maxim magazine Hot 100 of 2007 list.
*She was named number 2 on Forbes ‘The World’s Highest-Paid Models’ 2014 list.
*She has tattoos: Snake on left foot.
*Visit her official website: www.adrianalima.com
*Follow her on Twitter, Facebook and Instagram.