Trisha Krishnan is an Indian film actress and model, who appears mainly in Tamil and Telugu films. She made her acting debut with a supporting role in the 1999 Tamil film Jodi at age 16. Her first Bollywood film was Priyadarshan’s Hindi comedy drama film Khatta Meetha (2010), for which she received Filmfare Award for Best Female Debut nomination. Her accolades include three Filmfare Awards for Best Telugu Actress. Her notable film credits include Varsham, Krishna, Abhiyum Naanum, Endrendrum Punnagai, Saamy, Aadavari Matalaku Ardhalu Verule, Kodi, and Vinnaithaandi Varuvaayaa. Trisha was born on the 4th of May 1983 in Pallakad, Kerala, India to Krishnan and Uma. 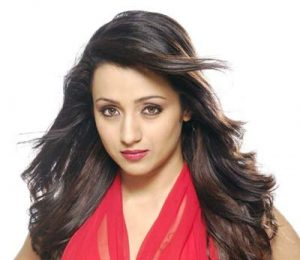 Trisha Krishnan Facts:
*She belongs to Tamil/Malayalee Brahmin.
*She made her screen debut in the 1999 film Jodi.
*She was crowned Miss Chennai 2000 beauty pageant.
*She is fluent in English, Hindi, Tamil and French.
*Is the Goodwill Ambassador for PETA.
*Follow her on Twitter, Facebook, Google+, and Instagram.