Tsvetana Pironkova is a Bulgarian professional tennis player, born September 13, 1987, in Plovdiv, Bulgaria, to Kiril Enchev Pironkova, a former canoeing champion, and Radosveta Chinkova Nikolova, a former swimmer. Tsvetana has been ranked as the number one female tennis player in Bulgaria. She is right-handed and plays with a two-handed backhand, and has won numerous International Tennis Federation titles. She has a sister named Elisaveta and a brother named Encho. She has been married to her long-time boyfriend Mikhail Mirchev, former Bulgarian Football player, since July 2016. 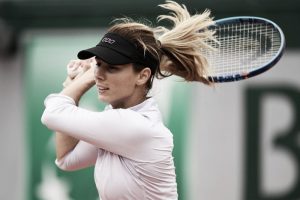 Tsvetana Pironkova Facts:
*She started hitting tennis balls at the age of four.
*MSN named her one of the most beautiful women in sports.
*Her mother Radosveta was a champion swimmer and her father Kiril was a champion canoer.
*She played her first ITF tournament in 2002, when she was fourteen years old.
*She is the first Bulgarian tennis player to reach the semifinal stage of a Grand Slam in singles.
*Follow her on Twitter, Facebook and Instagram.