Tulsi Gabbard is an American politician who has been the United States Representative for Hawaii’s second congressional district since 2013. She is the first Samoan American and Hindu member of the United States Congress. She is a member of the Democratic Party and was also a vice-chair of the Democratic National Committee until February 28, 2016. She served in a field medical unit of the Hawaii Army National Guard in a combat zone in Iraq from 2004 to 2005 and was deployed to Kuwait from 2008 to 2009. Born on April 12, 1981, in Leloaloa, American Samoa, she is the fourth of five children of Carol Porter and Mike Gabbard. Gabbard is of Samoan and European descent on her father’s side, and of German descent on her mother’s side. She graduated in 2009 from Hawaii Pacific University with a bachelor of science degree in business administration. She began her political career as a member of the Honolulu City Council. She has been married to Abraham Williams since April 9, 2015. She was previously married to Eduardo Tamayo from 2002 to 2006. 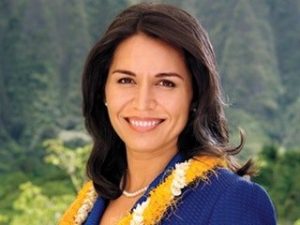 Tulsi Gabbard Facts:
*She was born on April 12, 1981, in Leloaloa, American Samoa.
*She was raised in a multicultural and multireligious household.
*Her father is Catholic & Carol Gabbard while her mother is Hindu.
*Her name ‘Tulsi’ means the holy basil, a plant sacred in Hinduism.
*She spent two years in the Philippines as a child.
*She holds Bachelor of Science degree in Business Administration.
*She was elected in 2012.
*First Samoan American and Hindu member of the United States Congress.
*She previously served as a member of the Hawaii House of Representatives, the Honolulu City Council.
*She was a martial arts instructor in 2002.
*Her sister, Vrindavan, is a U.S. marshall.
*In January 2019, she announced her campaign to seek the Democratic nomination for President of the United States in 2020.
*Visit her official website: www.votetulsi.com
*Follow her on Twitter, Facebook, LinkedIn, YouTube and Instagram.