Tyler Riggs is an American fashion model and actor who debuted at Gaetano Navarra in Milan during Milan Fashion Week F/W 2008-2009 and opened his first show – Neil Barrett. He has walked the runway for the most important brands and designers like Alessandro Dell’Acqua, Alexander McQueen, Louis Vuitton, Marni, Costume National, DKNY, Givenchy, Gucci, Hermès, Kenzo, Moschino and Thierry Mugler. Riggs has appeared on the cover of Sportswear International, GQ Style Russia, and Contributing Editor. He has booked print ad campaigns for Louis Vuitton, Diesel, Sisley, Bershka, Raoul Fashion, D&G, Topman, Ray-Ban, William Rast for Target and Converse by John Varvatos. Born on February 25, 1986 in Tampa, Florida, USA, Riggs began his modeling career began by accident when posing for a class project for his friend, a photography student. He signed with Red Model Management in 2007, and moved to New York City. He married Finnish model Suvi Koponen in January 2012. They have two children. 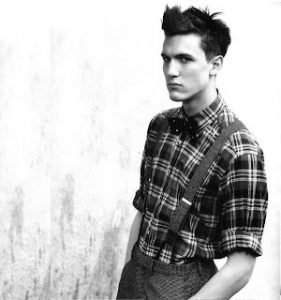 Tyler Riggs Facts:
*He was born on February 25, 1986 in Tampa, Florida, USA.
*He has been featured as an “exciting new face” and “model of the week” by Models.com.
*His wife Suvi Koponen is a Finnish model.
*He was ranked #7 on Forbes.com’s June 2009 list of the most successful male models.
*Currently, he resides in Los Angeles.