Emmy Award-winning actress, Uzo Aduba is most famous for her portrayal of Suzanne “Crazy Eyes” Warren on the Netflix comedy series, Orange Is the New Black. She earned her the 2014 Primetime Emmy Award for Outstanding Guest Actress in a Comedy Series and the 2015 Screen Actors Guild Award for Outstanding Performance by a Female Actor in a Comedy Series for the role. She is also known for her supporting role in the Ewan McGregor and Jennifer Connelly starrer drama movie, American Pastoral. She first gained attention with her performance in Translations of Xhosa at the Olney Theatre Center for the Arts, for which she won a Helen Hayes Award nomination for Outstanding Supporting Actress. She made her Broadway debut in Coram Boy (2007). She made her television debut in an episode of Blue Bloods in 2012. She was born from Nigerian parents, in Ozieri in Boston, Massachusetts, USA. She belongs to the Igbo community in Nigeria. 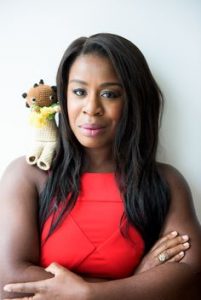 Uzo Aduba Facts:
*She was born in Boston, MA but raised in Medfield.
*Before becoming an actress, she worked as a waitress.
*After graduating from Boston University College of Fine Arts, she moved to New York City to pursue her acting career.
*She participated in the competitive figure skating for ten years.
*She and Edward Asner are the only two artists to win Emmys in both Comedy and Drama categories for playing the same character.
*Follow her on Twitter, Facebook and Instagram.