Vanessa Jeri is a Peruvian actress, model and television presenter who became known for her performance in the comedy show, Mil Oficios. She and Sandra Arana became sex symbols after appearing on this comedy show. Vanessa could most recently be seen on the comedy show Teatro Desde El Teatro which is shown on America Television in Peru. Vanessa was born on December 2, 1983 in Lima, Peru as Vanessa Jeri Marruffo. She has two sisters; Heideing and Ingrit Jeri. 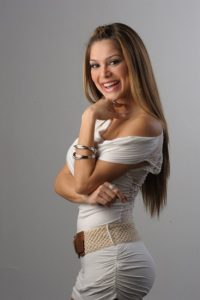 Vanessa Jeri Facts:
*During her childhood, she did not seriously entertain the idea of becoming a famous actor.
*She and Sandra Arana became sex symbols after appearing on the comedy show, Mil Oficios.
*In 2006, she participated in the miniseries Las vírgenes de la cumbia de Frecuencia Latina.
*Follow her on Twitter, Facebook and Instagram.