Vanessa Lee Evigan is an American actress. She rose to fame by portraying the role of Jenny Clemens in the critically acclaimed drama Against the Grain, which also starred Ben Affleck. She has also starred in the CBS Daytime soap opera The Young and the Restless, the UPN sitcom Social Studies, and the ABC Family Original Movie Holiday in Handcuffs. Born in Burbank, California, on March 18, 1981, she is the daughter of actor Greg Evigan and actress Pamela Serpe, and sister to actress Briana Evigan and singer-songwriter Jason Evigan. She attended Calabasas High School and graduated in 1999. 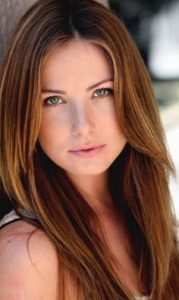 Vanessa Lee Evigan Facts:
*Daughter of actor Greg Evigan and Pamela Serpe, and sister to Jason Evigan and Briana Evigan.
*She started her acting career at only eight years old in My Two Dads with her father.
*She was in a relationship with Rob Bourdon from 2001 to 2007.
*Follow her on Twitter, Facebook and Instagram.