Vanessa Marcil is an American actress. She is best known for her portrayal of Brenda Barrett on the ABC daytime soap opera General Hospital, and for her role as Gina Kincaid in the Aaron Spelling-produced TV series Beverly Hills, 90210. From 2003 to 2008, Marcil played Sam Marquez, a casino host on the TV drama Las Vegas. Her other notable works include Crossing Jordan, Lipstick Jungle, The Nanny Express, Without a Trace, NYPD Blue, The Bannen Way, Hawaii Five-0, Hell’s Kitchen, and The Convenient Groom. Born Vanessa Sally Ortiz on October 15, 1968 in Indio, California, to parents Peter and Patricia Marcil Ortiz, she grew up with her older brother Pete Samuel “Sam” Ortiz Jr. and older sisters Tina & Sherry. She is of Mexican descent on her father’s side, and of Italian, French and Portuguese descent on her mother’s side. She attended Indio High School in Indio, California and studied law at the College of the Desert in Palm Desert. She made her film debut in the role of Carla Pestalozzi in the 1996 action thriller The Rock. Vanessa was married to Corey Feldman from 1989 to 1993 and Carmine Giovinazzo from 2010 to 2013. She has a son: Kassius Marcil-Green with ex-fiancé, Brian Austin Green. 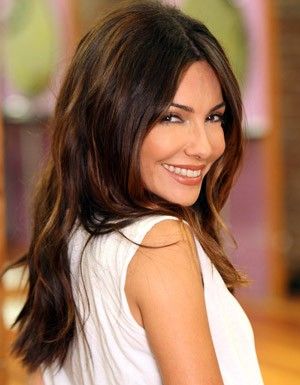 Vanessa Marcil Facts:
*She was born on October 15, 1968 in Indio, California, USA.
*She was named in honor of actress Vanessa Redgrave.
*She began acting at age 8, and Performed her own song at a 6th grade talent show and won.
*Played Brenda Barrett in the medical drama series, General Hospital.
*Played Gina Kincaid in the drama TV series, Beverly Hills, 90210.
*She starred as Sam Marquez on NBC’s Las Vegas.
*She was offered the cover and a layout in Playboy but she declined.
*People Magazine named her one of the top 50 Most Beautiful People in the World in 1996.
*Her favorite movies are The Godfather, An Officer and a Gentleman, Urban Cowboy, Terms of Endearment), and Life Is Beautiful.
*She has two dogs named Whiskey and Cowboy.
*In 2001, Vanessa became engaged to Brian Austin Green with whom she has a son: Kassius Marcil-Green (b. March 15, 2002).
*She had a tattoo on her lower back of a tribal symbol representing peace and love in the universe. She had the tattoo removed in 2018.
*Her brother, Sam Ortiz passed away on November 7, 2019.
*Follow her on Twitter and Instagram.