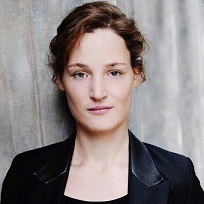 Vicky Krieps is a Luxembourgish actress who has starred in a number of American, Luxembourgish, German, and French productions. Her notable film appearances include: Hanna, Two Lives, A Most Wanted Man, Bergman Island, The Chambermaid Lynn, Colonia, and Old.

She is in a relationship with actor Jonas Laux. She has two children, Elise and Jan-Noah.

Vicky Krieps Facts:
*She was born on October 4, 1983 in Luxembourg, Luxembourg.
*She attended Zurich University of the Arts, while gathering acting experience at Schauspielhaus Zürich.
*She made her film debut in House of Boys (2009).
*Follow her on Facebook and Instagram.