Whitney Cummings is an American actress and comedian who first gained attention with her role on Punk’d on MTV in 2004. She is the creator and star of the NBC sitcom Whitney. She is also the co-creator of the CBS sitcom 2 Broke Girls. Her other notable works and roles include Love You, Mean It with Whitney Cummings, Chelsea Lately, Made of Honor, Comedy Central Roasts, and The Tony Rock Project. She was born Whitney Ann Cummings on September 4, 1982 in Georgetown, Washington, D.C., to Patti and Vince Cummings. She graduated Magna Cum Laude from The University of Pennsylvania with degrees in communications and film. In 2013, she began dating Peter Berg. 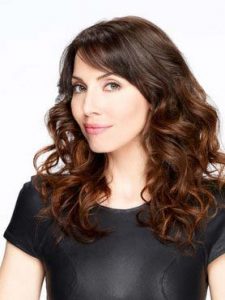 Whitney Cummings Facts:
*She was born and raised in Washington, D.C.
*Her parents separated when she was five years old.
*She is the first female comedian to perform in Dubai and Beirut.
*in 2007, she was named one of Variety’s Top Ten Comics to Watch.
*She is best friend with Ginnifer Goodwin.
*Follow her on Twitter, Facebook and Instagram.