Mark Steines is an American journalist and actor. He is best known for hosting the celebrity news show Entertainment Tonight from 2004 to 2012. He was awarded two Emmys and a Golden Mike Award for his work on KCAL specials. Mark was born on June 7, 1964 in Dubuque, Iowa, U.S. as Mark Anthony Steines. He has an older brother named Mike. He is a University of Northern Iowa graduate with a B.A. in radio and television. He has been married to Julie Steines since 2016. He was married to Leanza Cornett from 1995 to 2013. 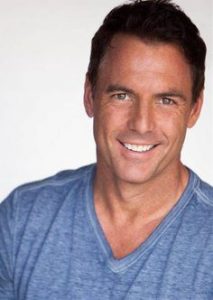 Mark Steines Facts:
*Emmy award-winning journalist who was born in Dubuque, Iowa.
*He enrolled at University of Northern Iowa on a football scholarship.
*He was appeared in People Magazine’s coveted “Sexiest Man Alive” issue and Men’s Fitness Magazine’s “25 Fittest Men in America.”.
*Follow him on Twitter and Facebook.