Whoopi Goldberg is an American actress, comedian, and television host as well as human rights advocate. She became recognized for her role as Celie Harris Johnson in the 1985 film The Color Purple. Her accolades include an Emmy Award, a Grammy Award, an Oscar, and a Tony Award. For her work in television, she has been nominated for 13 Emmy Awards. She played a psychic in the 1990 film Ghost, for which she won an Academy Award for Best Supporting Actress. As a producer of the Broadway musical Thoroughly Modern Millie, she won a Tony Award in 2002. Born Caryn Elaine Johnson on November 13, 1955 in New York City, New York, USA, she is the daughter of Emma Harris, a teacher and a nurse, and Robert James Johnson, a clergyman. She studied drama at HB Studio in Greenwich Village, New York City. She was married to Alvin Martin, Lyle Trachtenberg and David Claessen. She has a daughter, Alex Martin. 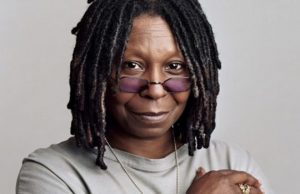 Whoopi Goldberg Facts:
*She performed with the Children’s Program, the Hudson Guild and the Rubenstein Children’s Theatre at age 8.
*She has her own production company named One Ho Productions, which backs most of her movies and television projects.
*She has a tattoo of Woodstock on her shoulder.
*She is good friends with Patrick Stewart, Marlon Brando, Billy Crystal and Robin Williams.
*She is left-handed.
*Follow her on Twitter, YouTube, Facebook and Instagram.