Willow Smith is an American singer, actress and dancer. She gained musical fame through her first hit song “Whip My Hair”, which went platinum in the US and reached #11 on the Billboard Hot 100. She released her debut album, ARDIPITHECUS, in 2015. Born Willow Camille Reign Smith on October 31, 2000 in Los Angeles, California, USA, she is the daughter of Will Smith and Jada Pinkett Smith and younger sister to Trey Smith and Jaden Smith. She made her acting debut in the blockbuster film I Am Legend at the tender age of seven. For her performance in Kit Kittredge: An American Girl, she won a Young Artist Award. 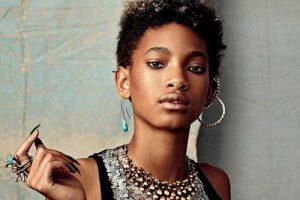 Willow Smith Facts:
*Her dad, Will Smith, is an actor and her mother, Jada Pinkett Smith, is also a successful actress.
*Her older brother is actor Jaden Smith.
*She started acting at the age of 7 with the 2007 film “I Am Legend.”
*She signed with Jay-Z’s Roc Nation music label in 2010.
*She released her debut EP titled “3” via Roc Nation Records on October 31, 2014.
*Visit her official website: www.willowsmith.com
*Follow her on Twitter, SoundCloud, YouTube, Facebook and Instagram.