Ukrainian former professional boxer who is widely considered to be one of the greatest boxers of all time. Klitschko competed from 1996 to 2017, and held the world heavyweight championship twice, including the WBA (Super), IBF, IBO, WBO, and Ring magazine titles. He holds the record for the longest cumulative heavyweight title reign of all time, with 4,382 days as world heavyweight champion. Born Wladimir Wladimirovitsch Klitschko on March 25, 1976 in Semipalatinsk, Kazakh SSR, USSR, to parents Nadezhda and Vladimir Rodionovich Klitschko, he is the younger brother of Vitali Klitschko, former WBC, WBO and Ring magazine heavyweight champion and, the current Mayor of Kiev. Klitschko began boxing in the early 90’s and won the Junior European Championships in 1993. In October 2013, Klitschko became engaged to American actress and singer Hayden Panettiere, whom he had been dating for over four years. In December 2014, Panettiere gave birth to their daughter. They separated in 2018. He was previously married to Aleksandra from 1996 to 1998. 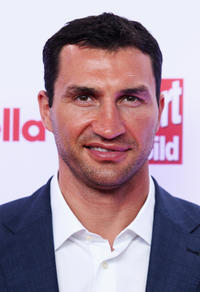 Wladimir Klitschko Facts:
*He was born on March 25, 1976 in Semipalatinsk, Kazakh SSR, USSR [now Semey, Kazakhstan].
*His parents are Vladimir Rodionovic Klitschko and Nadezhda Ulyanovna.
*He is considered one of the world’s best heavyweight boxers.
*He became a dominant force in the heavyweight division in 2005.
*He won a gold medal at the 1996 Olympics in the super heavyweight class.
*He is fluent in Russian, Ukranian, German and English.
*From 2009 to 2018, Klitschko was in a relationship with Hayden Panettiere.
*Visit his official website: www.klitschko.com
*Follow him on Twitter, Facebook and Instagram.