Xherdan Shaqiri is a Swiss professional footballer who plays as a winger for Ligue 1 club Lyon and the Switzerland national team. He has also played for FC Basel, Bayern Munich, Inter Milan, Stoke City and Liverpool. Shaqiri represented the Swiss team at the 2010, 2014 and 2018 FIFA World Cups, as well as UEFA Euro 2016. Born on October 10, 1991 in Gjilan, SFR Yugoslavia, to Kosovar Albanian parents Fatime and Isen Shaqiri, he immigrated to Switzerland in 1992 with his parents and three siblings. Shaqiri started his career at hometown club SV Augst, and at the age of eight he was scouted by FC Basel. He debuted for Switzerland under-21s on 11 November 2009 in a 3–1 win against Turkey in a 2011 UEFA European Under-21 Championship qualifier. 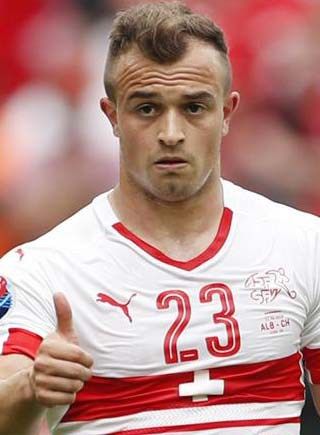 Xherdan Shaqiri Facts:
*He was born on October 10, 1991 in Gjilan, SFR Yugoslavia.
*He is of Yugoslavian and Albanian descent.
*He began his career at FC Basel, winning honours including three Swiss Super League titles, before moving to Bayern Munich.
*He was chosen to be on the cover of the FIFA video game FIFA 15 in Switzerland next to Lionel Messi.
*He was the most Googled personality in Switzerland in 2018.
*He idolised Brazilian striker Ronaldo.
*Visit his official website: www.xherdanshaqiri.com
*Follow him on Twitter, Facebook and Instagram.