Jodie Whittaker is an English actress of film and television. She came to prominence after her breakout performance in the 2006 feature film Venus, for which she received British Independent Film Award and Satellite Award nominations. From 2013 to 2017, Whittaker starred as Beth Latimer in Chris Chibnall’s TV series Broadchurch. She has also starred in Journeyman, Adult Life Skills, Wired, Attack the Block, Good Vibrations, and Trust Me. In 2017, Whittaker began starring in the science fiction television series Doctor Who. Born Jodie Auckland Whittaker on June 17, 1982 in Skelmanthorpe, United Kingdom, to parents Yvonne and Adrian Whittaker, she has one older brother. She attended Scissett Middle School and Shelley High School, and graduated from Guildhall School of Music and Drama in 2005 where she won the Gold Medal for Acting. She married American actor Christian Contreras in 2008. They have a daughter together. 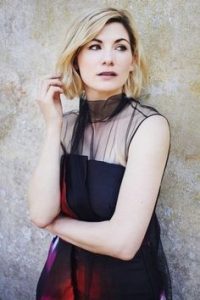 Jodie Whittaker Facts:
*She was born on June 17, 1982 in Skelmanthorpe, United Kingdom.
*She was named after the American actress Jodie Foster.
*She is the aunt of late child actor Harry Whittaker (2011-2014).
*Her breakout role was in the 2006 film Venus.