Xuefei Yang is a Chinese classical guitarist who has performed in more than 50 countries at numerous prestigious venues such as Wigmore Hall, all Southbank venues, and Royal Albert Hall in London, as well as the Philharmonie Berlin, Auditorio Nacional de Espana, Concertgebouw Amsterdam, Konzerthaus Vienna, Barcelona Auditorium, Carnegie Hall & Lincoln Center New York. She has made many albums including several acclaimed recordings for EMI Classics. Born on March 15, 1977 in Beijing, China, Yang began playing the guitar at the age of 7. At age 10, Yang started studying under Chen Zhi, the Chairman of the China Classical Guitar Society. She made a public debut at the First China International Guitar Festival, where she met with an immediate acclaim. 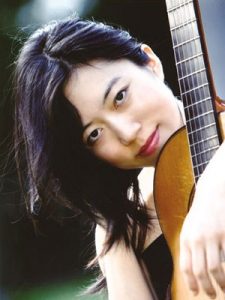 Xuefei Yang Facts:
*She was born on March 15, 1977 in Beijing, China.
*Starting at age 7, Yang began playing the guitar.
*At 12, she performed in Tokyo for the first time, and was given a special award by the Guitar Alliance of Japan.
*She is a graduate of Beijing’s Central Conservatoire of Music.
*In 2000, she moved to London to study under John Mills, Michael Lewin and Timothy Walker.
*In 2003 Xuefei performed 54 concerts for the “Night of the Proms” Tour, appearing in Belgium, The Netherlands and Germany, to a total audience of over 800,000 people.
*The UK classical music magazine, Classic FM, named her as one of the 100 top classical musicians of our time.
*She was awarded ‘Fellowship of the Royal Academy of Music’ in June 2012.
*Visit her official website: www.xuefeiyang.com
*Follow her on Twitter, YouTube, Facebook and Instagram.