Yara Shahidi is an American actress and model. She is best known for playing Zoey Johnson on the ABC series Black-ish and its spin-off Grown-ish. She played Chloe Johnson in the TV series The First Family. Born Yara Sayeh Shahidi on February 10, 2000 in Minneapolis, Minnesota, USA to Keri and Afshin Shahidi, her younger brother Sayeed, is also an actor and model, and they have a younger brother named Ehsan. She is of Iranian descent on her father’s side, and of African-American descent on her mother’s side. She moved California with her family when she was four because of her father’s work. She began appearing on commercials at the age of six. 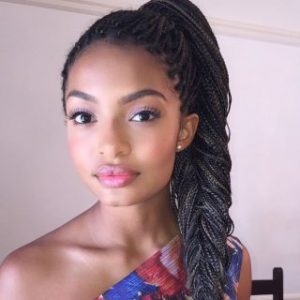 Yara Shahidi Facts:
*Her father is Iranian. Her mother is African-American.
*She is the second cousin to American rapper Nas.
*She has a black belt in Korean martial arts called Tang Soo Do.
*She is friends with Rowan Blanchard.
*Her style icon is Kerry Washington.
*Visit her official website: www.yarashahidi.com
*Follow her on Twitter, Facebook and Instagram.