Yasmeen Ghauri is a former Canadian supermodel who has worked with such fashion designers as Jil Sander, Gianni Versace, Helmut Lang, and Jean-Paul Gaultier. She has appeared on several magazine covers including Elle, Sports Illustrated, Harper’s Bazaar, Marie Claire, and Vogue. She also appeared in the Isaac Mizrahi’s 1995 documentary Unzipped and walked the 1996 annual Victoria’s Secret Fashion Show. 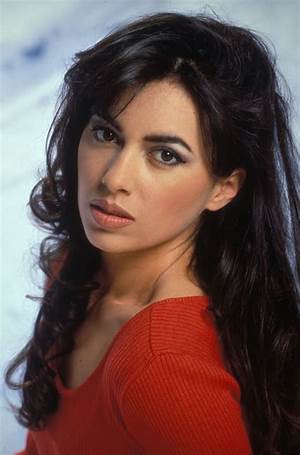 Born on March 23, 1971 in Montreal, Canada, to parents Linda and Moin Ghauri, she is of German descent on her mother’s side and Pakistani descent on her father’s side. Ghauri was raised Muslim had a difficult childhood and was bullied by her classmates at school for her Pakistani heritage. She went with her parents for the Islamic Hajj pilgrimage to Mecca when she was 12. At 17, Ghauri was discovered by Montréal hairdresser and artistic director Edward Zaccharia while she was working at a local McDonald’s outlet. She is married to Ralph Bernstein with whom she has two children, Maia and Victor.

Yasmeen Ghauri Facts:
*She was born on March 23, 1971 in Montreal, Canada to a German mother Linda and a Pakistani father, Moin Ghauri.
*Before she started modeling, she used to work at a McDonald’s and was named “Employee of the Month.”
*She appeared on the music video of the Elton John song Sacrifice (1989), along with Chris Isaak.
*She became the face of Christian Dior and Anne Klein in 1991.
*She was the inspiration for the character Jasmine in the comic book series Jonathan Steele.