English-Canadian actress, Zoie Palmer is most famous for her portrayal of Dr. Lauren Lewis on the Canadian television series Lost Girl. She is also known for her role as The Android in the SyFy science fiction series Dark Matter. For her performance in 2012 film Cold Blooded, she won the Gold Medallion Acting Award for Best Actress in a Feature Film. She was born in Camborne, Cornwall, England and grew up in Georgina, Ontario, Canada. She belongs to English and Irish descent. 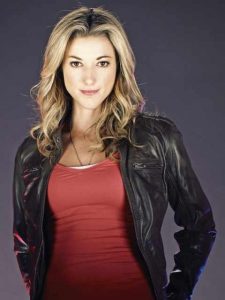 Zoie Palmer Facts:
*She is of English and Irish descent.
*She moved to Canada when she was 9 years old.
*She announced her sexual orientation as lesbian at the 2014 Canadian Screen Awards.
*Follow her on Twitter.