Zooey Deschanel is an American actress, model, and singer-songwriter who starred as Jess Day in the Fox sitcom New Girl (2011–18), for which she received an Emmy Award nomination and three Golden Globe Award nominations. She has also starred in such films as All the Real Girls, 500 Days of Summer, The New Guy, The Good Girl, Winter Passing, Manic, Elf, Bridge to Terabithia, Failure to Launch, Yes Man, Bridge to Terabithia, Almost Famous and The Hitchhiker’s Guide to the Galaxy. In 2006, Deschanel formed the musical duo She & Him with singer/guitarist M. Ward. They have released five studio albums since 2008. She has also collaborated with artists such as Prince and Brian Wilson. Born Zooey Claire Deschanel on January 17, 1980 in Los Angeles, California, to Academy Award–nominated cinematographer and director Caleb Deschanel and actress Mary Jo Deschanel, she is the younger sister of actress Emily Deschanel, who starred in the Fox crime comedy-drama series Bones. She graduated from Crossroads School for Arts and Sciences in Santa Monica. She married producer Jacob Pechenik in 2015. They had a daughter named Elsie Otter and a son named Charlie Wolf before separating in 2019. She was previously married to Death Cab For Cutie frontman Ben Gibbard from 2009 to 2011. 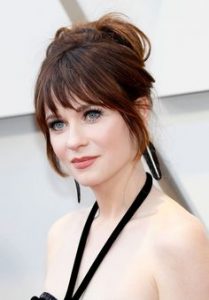 Zooey Deschanel Facts:
*She was born on January 17, 1980 in Los Angeles, California, USA.
*She is the daughter of Caleb Deschanel and Mary Jo Deschanel, and younger sister of actress Emily Deschanel.
*She was named after Zooey Glass, the male protagonist of J. D. Salinger’s 1961 novella Franny and Zooey.
*She made her film debut in the 1999 film Mumford.
*She made her television debut in the sitcom series Veronica’s Closet in 1998.
*She played Jess Day in the Fox sitcom New Girl from 2011 to 2018.
*She wrote the main theme for New Girl and Winnie the Pooh: The Movie.
*She is a huge fan of actress Parker Posey.
*She plays the piano and the baritone ukulele.
*She allergic to gluten, dairy, and eggs.
*She is good friends with Joseph Gordon-Levitt.
*She is a registered Democrat.
*Visit her official website: www.sheandhim.com
*Follow her on Twitter, SoundCloud, Facebook and Instagram.