Ieva Lagūna is a Latvian fashion model who appeared in the 2011 Victoria’s Secret Fashion Show. She has appeared in campaigns for many important fashion houses such as Shiatzy Chen, Christian Dior, Nina Ricci, Dolce & Gabbana, Versace, Carolina Herrera, and Michael Kors. She has appeared on the cover of fashion magazines such as Vogue Germany, Vogue Greece, Rush magazine, Elle France, and Marie Claire Italy. Born on June 6, 1990 in Saldus, Latvian, she was discovered in 2007 during the MTV/B-day festival in Riga by Nils Raumanis, the founder of DANDY model management. She made her runway debut at the Spring 2008 London fashion Week in the Burberry anniversary fashion show. In 2008 Ieva signed with model agency Women Management Paris and SUPREME Model Management in New York. She has been married to Tamirs Jozefs Hermans since 2018. 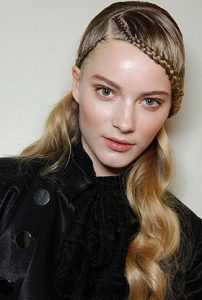 Ieva Laguna Facts:
*She was born on June 6, 1990 in Saldus, Latvian.
*She started modeling in 2007.
*She walked in the Victoria’s Secret Fashion Show 2011.
*She modeled for Zara fall catalogue in 2009.
*She is friends with models Anya Kazakova, Julia Hafstrom, Rasa Zukauskaite, Bregje Heinen, Nicole Hofman, Lais Ribeiro, and Karlina Caune.
*Follow her on Twitter, Facebook and Instagram.