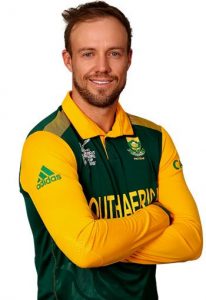 AB de Villiers Facts:
*He was born on February 17, 1984 in Bela-Bela, South Africa.
*His full name is Abraham Benjamin de Villiers.
*He was educated at Afrikaanse Hoër Seunskool in Pretoria along with teammate Faf du Plessis.
*He began his international career as a wicket-keeper-batsman.
*He has the record of hitting the fastest One Day International (ODI) century in just 31 balls.
*He also records the fastest One Day International (ODI) 50, 100 and 150.
*He announced his retirement from all forms of international cricket in May 2018.
*He is a football enthusiast and his favourite soccer team is Manchester United.
*Follow him on Twitter, Facebook and Instagram.