Indian television actress Abigail Jain is most famous for her portrayal of Sia dhillion in the television series Humse Hai Liife, as Kakoon in television drama Kya Dill Mein Hai, and Dr Aaliya in soap medical drama series zindgi wins. She is also known for her role as Madhu in television series Sajan Ghar Jaana Hai, which aired on STAR Plus channel. Her other notable works include Tujh Sang Preet Lagai Sajna, SauBhagyalaxmi, D4, and Naagarjuna – Ek Yoddha. Born Abigail Rajiv Jain in Mumbai, India, she is the daughter of Smita Nair Jain and Rajiv Jain. She has one younger sister, Kimberly, who is also an actress. 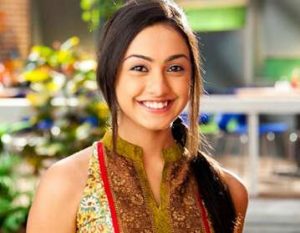 Abigail Jain Facts:
*She is the first runner up in Nach Baliye 8.
*She began her acting career in 2007 portraying the starring role in 9X’s TV serial Kya Dill Mein Hai.
*Outside of acting, she is a good dancer.
*Follow her on Facebook and Instagram.