Ada Nicodemou is an Australian actress. She is best known for her television roles as Katerina Ioannou in Heartbreak High, Anastasia Skouras in Police Rescue, Fiona Motson in Breakers, and Leah Patterson-Baker in the soap opera Home and Away. Nicodemou won the third season of Dancing with the Stars, with her dance partner Aric Yegudkin and became the host of the reality series Please Marry My Boy in 2012. 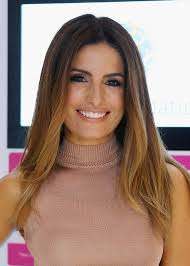 Born on May 14, 1977 in Carlton, Australia, she is of Greek descent. She has one younger brother named Costa. She was educated at The Grange Public School, and the Johnny Young Talent School, where she learned to sing, dance and act. From 2007 until 2016, Nicodemou was married to Chrys Xipolitas. The couple had two sons, Johnas and Harrison. In 2016, she began dating businessman Adam Rigby.

Ada Nicodemou Facts:
*She was born on May 14, 1977 in Carlton, Australia.
*She made her acting debut in 1994 playing Katerina Ioannou in Heartbreak High.
*She has nominated for 5 Logie Awards for Home and Away.
*In 2005, she became an ambassador of the PixiFoto Foundation that raises funds for a Childhood Blindness Prevention program in Africa.
*She won the Inside Soap Award for Best Australian Actress in 2006.
*She is an ambassador for Save our Sons, a charity supporting Duchenne muscular dystrophy and the National Breast Cancer Foundation.
*She is a supporter of the Starlight Children’s Foundation and Make-A-Wish Foundation Australia.
*Follow her on Twitter, Facebook and Instagram.