Adaa Khan is an Indian actress. She is best known for television roles as Akashi on Behenein, Amrit on Amrit Manthan and Naagin Shesha on Naagin. In May 2019, Khan appeared as a guest star in the final few episodes of Naagin 3 as Shesha. Other notable roles include Sitara Bansal/Vishtara in Vish Ya Amrit: Sitara, Shruti in Rishton Ka Mela, and Sofia in Fear Files. In 2020, Khan participated in the reality show Fear Factor: Khatron Ke Khiladi 10. 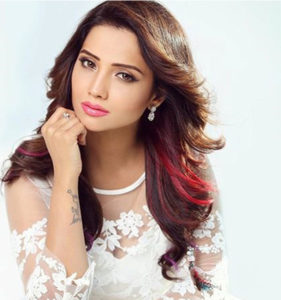 Born on May 12, 1989 in Mumbai, Maharashtra, India, to parents Parvin and Abbas Khan, she has one younger brother named Imran. Khan began her career as a model, and did several advertisements.

Adaa Khan Facts:
*She was born on May 12, 1989 in Mumbai, Maharashtra, India.
*Her mother Parvin Khan died from cancer in March 2013.
*She made her debut into Hindi television industry in 2014, playing the role of Vigya, the female lead’s friend in Sony Entertainment Television show Palampur Express.
*She was part of the reality show Welcome 2 – Baazi Mehmaan Nawazi Ki.
*Follow her on Twitter, TikTok, Facebook and Instagram.