Adelayo Adedayo is an English actress. She is best known for her portrayal of Viva Bennett on the BBC Three comedy series Some Girls. In 2017, she began starring in the ITV2 sitcom Timewasters as Lauren. She also had a recurring roles in Origin and The Capture. 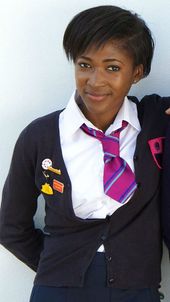 Adelayo Adedayo Facts:
*She was born on December 18, 1988 in Manchester, Greater Manchester, UK.
*She made her television debut as Estelle Makobi in The Bill (2007).
*She made her film debut as Kerry in the 2011 feature film Sket.
*In 2012 she had a leading role in Some Girls, playing Viva Bennett.
*She portrayed Agnes “Lee” Lebachi in the YouTube science fiction series, Origin.
*Follow her on Instagram.