Laura Haddock is a British actress. She is best known for starring as Kacie Carter in Honest, Lucrezia in Da Vinci’s Demons, Meredith Quill in Guardians of the Galaxy and its sequel Guardians of the Galaxy Vol. 2, Alison in The Inbetweeners Movie and Viviane Wembly in Transformers: The Last Knight. Haddock also starred in adverts for dot tel. Haddock played the lead role of Natasha in the ITV1 comedy drama Monday Monday, and appears as Samantha in series two and three of How Not to Live Your Life. 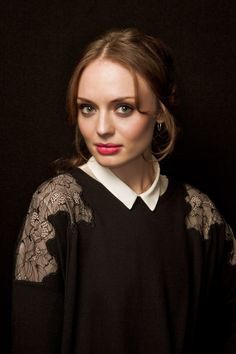 Born Laura Jane Haddock on August 21, 1985 in London Borough of Enfield, United Kingdom, to a financier father (Ian Haddock) and a reflexologist mother (Deborah Haddock), Laura was raised in Harpenden, Hertfordshire. She attended St George’s School but left school at the age of 17 and moved to London to study drama. She trained at Arts Educational School in Chiswick. Her first television appearance was in the television pilot Plus One, part of the Comedy Showcase 2008. She married English actor Sam Claflin in July 2013 after dating for two years, but the couple separated in 2019. They have two children together.

Laura Haddock Facts:
*She was born on August 21, 1985 in London Borough of Enfield, United Kingdom.
*She studied acting at the Arts Educational School in Chiswick, England.
*She debuted with the the television pilot Plus One, part of the Comedy Showcase 2008.
*She is a big fan of Paul Rudd.
*Follow her on Twitter and Instagram.