American former professional baseball shortstop, businessman and baseball executive who played as the captain for the New York Yankees and is an eleven-time All-Star shortstop for the New York Yankees. Since September 2017, he has been the chief executive officer (CEO) and part owner of the Miami Marlins of Major League Baseball (MLB). Born Derek Sanderson Jeter on June 26, 1974 in Pequannock, New Jersey, to parents Dorothy and Sanderson Charles Jeter, he is of African-American descent on his father’s side, and of English, German, and Irish descent on his mother’s side. Jeter was raised in Kalamazoo, Michigan, and graduated from Kalamazoo Central High School in 1992. He was drafted by the New York Yankees while a senior in high school. In July 2016, Jeter married model Hannah Davis after four years of dating. They have two daughters together. 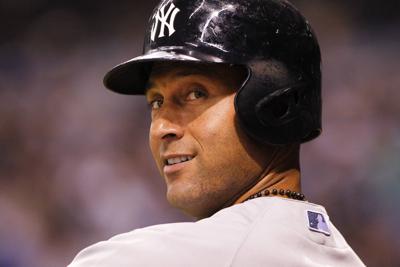 Derek Jeter Facts:
*He was born on June 26, 1974 in Pequannock, New Jersey, USA.
*He played basketball and baseball in high school.
*He was inspired to play baseball by Hall of Famer Dave Winfield.
*At age 20, he made his major league debut on May 29, 1995 with the New York Yankees against the Seattle Mariners.
*People Magazine named him one of the top 50 Most Beautiful People in the World in 1999.
*He became the only player to win both the All-Star Game MVP Award and the World Series MVP Award in 2000.
*He is good friends with Tiger Woods and Alex Rodriguez.
*Follow him on Facebook.